Below are some examples of communities that contain healthy biological principles. Historically, a community consisted of an urban core or village, surrounded by nature and farmland. This historic pattern has a cellular structure. It has a boundary that is based on a walkable distance to its town center. It has farmland to carry out its needed food production, and a nucleus that directs the activity of the cell. Several of the following communities are based on this pattern. 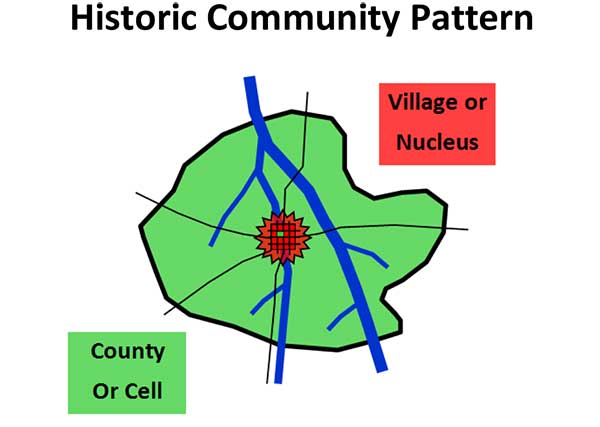 Santa Fe, New Mexico – Santa Fe was developed by the Spanish based on their Laws of the Indies. This was a treatise written by the Spanish crown on how they would develop their new communities in the Americas. They looked to establish key institutions in their communities; political and religious, with the goal of creating a sustainable economy. Government provided law and order, the church provided meaning, and the economy provided the needed resources to sustain the community.

Looking at the aerial below, we see a road network that looks like a spider web, with the central plaza (1-acre) as the focal point. The community is very walkable with small streets and small blocks, its downtown functions like a large house. With the plaza acting as an intimately scaled living room for the community.

St. Augustine, Florida – St. Augustine is another former Spanish colony, that was founded in 1565. It is also centered around a small plaza (1.3-acres). In St. Augustine, the plaza sits overlooking the intercoastal waterway, indicating the importance of water access to its economy. Like Santa Fe, St. Augustine was developed with its political and religious institutions at its center. It roads are also laid out at a walkable and intimate scale.

Below is a map of the original walled town. Based on the layout, it looks like it was developed under the direction of the governor. His house was strategically located at the end of the central plaza, overseeing his community, like a spider in his web. The original town was just under 100-acres.

Savannah, Georgia - Oglethorpe's concept for Savanna was based on European models, he gave each member of the community a lot in the village and a large plot of land outside of the village to farm. His design for the community has a cellular structure, creating a number of small parishes, each centered around a small square (0.5 to 1.5-acres each). Many with their own well and church. Williamsburg, Virginia – Williamsburg was established as the capitol of the Virginia Colony in 1699. It was laid out under the supervision of Governor Francis Nicholson. It was the center of political, religious, educational, and economic life for the community. The English had established these key institutions, their DNA, at Williamsburg so it could grow and prosper.

The Governor wanted to create a grand city as the colony’s capitol. You can image him overseeing its develop, looking to create a well-run community that he could be proud of and he could enjoy living in. He functioned as the controlling force for the development of this living system, the community. 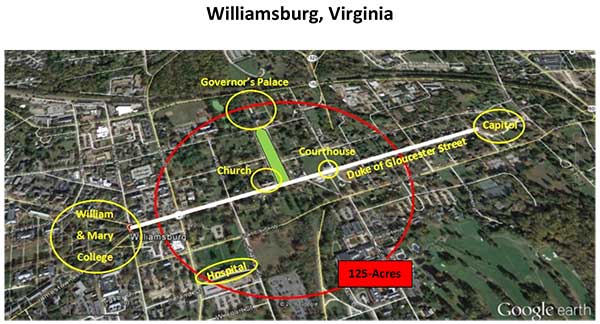 Winter Park, Florida – Winter Park was established in 1885. It was developed by real estate developers that wanted to attract northerners to come and stay during the winter. Its centerpiece is a 10-acre central park. Today the park contains a couple of fountains, a rose garden, a covered stage for performances, and the train station. The park functions as the living room for the community, promoting a sense of integration for its residents.

As you can see from the aerial below, the downtown area is very walkable. Park Avenue links many of the community’s key institutions, along with commercial establishments, and its Central Park. Winter Park’s major draw has been its chain of lakes. However, over time its public access has been greatly diminished with the closing of its lakefront hotels, and their replacement with private residences. 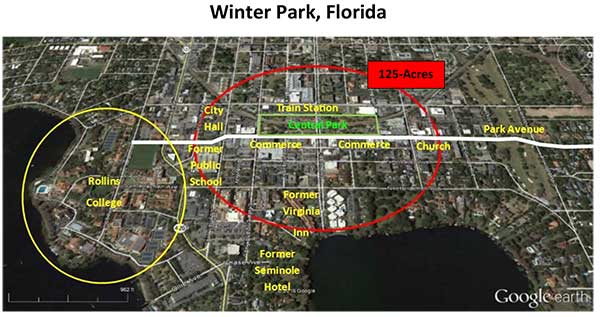